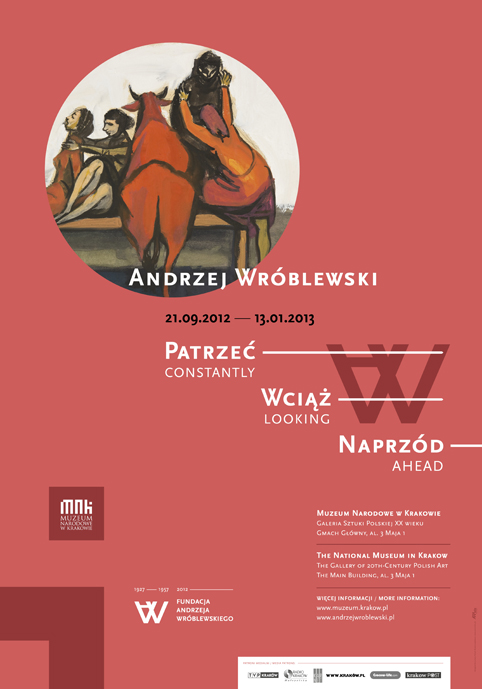 “I want to step out of myself, go beyond, achieve the impossible, fulfil an unprecedented task, realise a vision, create an absolutely convincing painting, build it with decisions” – wrote Andrzej Wróblewski (b. 1927, Vilnius – d. 1957, Tatry Mountains), in January 1948. This daring statement by a twenty-one-year old, who had been forcibly relocated from Vilnius in the spring of 1945, heralded the arrival of a new, original formula of realism in post-war painting. Wroblewski took up studies at the Painting and Sculpture Department of the Academy of Fine Arts in Krakow as well as in art history at the Jagiellonian University. Contrary to many other artistic positions typical of the 1940s, his intense practise, spanning less than a decade, is characterized by an unfailing belief in the power of art. Wróblewski was an astute commentator of contemporary artistic life. His numerous press articles and reviews discussing art with distinctly socialist content testify to his interests and hesitations, as well as his disappointment with, and involvement in the doctrine of Socialist Realism.

The title of this exhibition is a quotation from the artist’s writings of January 1948. Wróblewski’s statements are filled with the conviction that art and life are, in fact, intertwined. Their tone conveys a constant tension between the creative act and the mundane character of functioning amongst fellow artists in Krakow. Constantly Looking Ahead brings together works from the collection of the National Museum in Krakow, as well as other Krakow-based public and private collections, into four interwoven narratives. At their heart lies the search for a new language of modern art: from the calls for sharp, incisive works that let one “take a look inside man” (as Wróblewski put it, commenting on the 1st Exhibition of Modern Art in 1948), to the declaration of a Socialist Realist art from the early 1950s, one that is clear, subject-oriented, devoid of distortion and has a “broad social impact” and photographic character “in line with the imagination of the mass viewer”. The last months of Wróblewski’s practice, in the late autumn of 1956, saw the artist arrive at yet another new formula of figurative painting, in which the universe was no longer constructed from geometrical figures, nor built through the efforts of the members of the Academic Union of Polish Youth. It was a universe of inner tension, constant exploration, and struggle with oneself.

As well as highlights from the collection of the National Museum in Krakow, such as Room II (Chairing I) (1956), (Composition) [Family] (1957), Child with Dead Mother (Son and Dead Mother) (1949), and Poznań Execution ((Poznań) Execution II) (1949), the exhibition features a number of works that are less frequently on view in the Gallery of 20th Century Polish Art. These include the canvas Blind Woman a la Velazquez [Blind Woman] (1956), gouaches on paper from the years 1956–1957 Untitled (Women and Cow), (Trees and City), woodcut (Juggler) from 1946, sketches for the Execution series, as well as Mourning News, a series prepared in 1953 following the news of the death of Stalin, and a number of lithographs exploring Socialist Realist themes.

The exhibition, along with the accompanying publication, is the first project by the Andrzej Wróblewski Foundation, established in January 2012, prepared on the invitation of the National Museum in Krakow. It accompanied the closed seminar with international guests organised by the Museum of Modern Art in Warsaw and Prof.  Éric de Chassey from Villa Medici in Rome.